It’s quite cold here in Northeast Tennessee. I’m wishing I had a dragon of my own to keep me warm. Fortunately, Aldonza is doing well and improving every day. Her stitches and feeding tube are out and she’s getting back to herself. I enjoyed sitting on the bed earlier today with all my furbabies. The time we have together is so very precious. 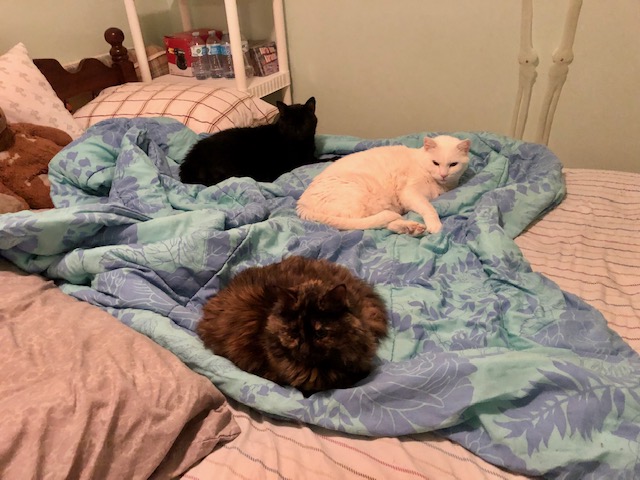 This week, I’m sharing more from the first chapter of Flying Upon One Wing as Ezklick continues his journey past his siblings to the front of his cave. Sometimes the most arduous journey is the one you take every morning. I’ve got 30 sentences for 01/30/2019. I’ve included a little bit (in red) from my last WIPpet post to help ease you into this week’s selection.

Ezklick backed away quickly and bumped into Frickus. “Hey,” Frickus moaned as he opened his eyes.

“What’s going on?” Gallant asked as he sat up with a yawn.

“Ezklick, do you always have to get up so early?” Geneva whined.

“Geneva, do you always have to whine?” Frickus fired back at her.

The entire cave was awake, and Ezklick found himself in the middle of it. He looked up and his eyes met those of his mother. She was awake. “Come on, Ezklick,” she assured.  Somewhat sheepishly, Ezklick finished his journey to the front of the cave. “It’s all right.  Go back to sleep,” Shangalaya instructed the rest of her young. There were a few more rumblings and complaints, but most of Ezklick’s nest mates did as they were told. None of them really wanted to be awake that early. As Ezklick passed, Shangalaya nudged him forward playfully with her snout. Ezklick perked up as she did so. She wasn’t angry with him. Ezklick had always been an early riser.

Morning’s breath entered the cave, scattering bits of shell about, blowing a piece out of the cave and onto the ledge. Ezklick followed it. He waited until it stopped, then he dropped down close to the stone and began to stalk the shell. Walking on silent paws, Ezklick crept closer and closer. Shangalaya watched with amusement as he prepared to lunge. Ezklick jumped forward and struck his target directly on the mark. The shell crumbled into pieces. Giving his opponent one last crunch, Ezklick stepped aside so his mother could see his victory.

Shangalaya smiled and stepped fully out onto the ledge.

Photo by Tyssul Patel on Unsplash

3 thoughts on “#WIPpet Wednesday Number 6 Flying Upon One Wing”